Now this is a traveller

I went to the launch of the book "A Brief History of Disability" by Bryan Breed. It's been published, posthumously, by John Coleman of New European Publications. I've known John for many years, so kindly invited me along. The launch was at a travel show, and John brought along his 1925 Austin -- he drove it up to London, it's still running -- that features in the book "Coleman's Drive". He drove it from Buenos Aires to New York -- solo up mountains, through jungles, across rivers -- in 1962. And there's me complaining because they didn't have my first choice left for dinner on my last flight back to London. Here's John with the car... 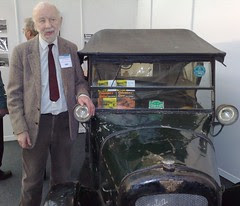 Anyway, it was a pleasure to be at the launch. Baron Morris of Manchester (better known as Alf Morris) gave a talk on the introduction of the 1970 Chronically Sick and Disabled Persons Act that was behind. He then went on, 1974, to become Britain's first Minister for the Disabled. 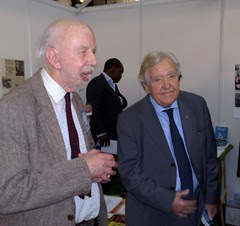 It's a privilege to spend a little time with men like these.

In the future, everyone will be famous to fifteen people.
[posted with ecto]
Posted by Cayce Pollard at 5:16 pm