A MyGov dashboard that allows every citizen to personalise the explosive growth of government services on the web was proposed today by Gordon Brown... In a wide-ranging speech on the impact of the web on the government, he said the MyGov dashboard will make citizen interaction with government as easy as internet banking or online shopping.

Since corporate dashboards are all the rage, I thought I'd experiment and have a guess at what the government dashboard might look like... 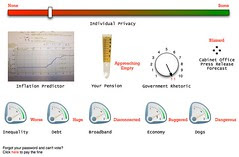 What do you think? Am I being too pessimistic -- will dogs be slightly less dangerous in the year 2025, or whenever the management consultants, systems integrators, outsourcers and business process re-engineers will have brought this cabinet office vision into existence?

In the future, everyone will be famous to fifteen people.
[posted with ecto]
Posted by Cayce Pollard at 6:39 pm 1 comment:

The miles are the goal

I just watched the new movie "Up in the Air", so I'm wondering -- in a purely hypothetical thought experiment, I should add -- if there are women out there who are sexually excited by a BA Gold Card even if the holder doesn't look like George Clooney. I hope so, because it's not worth having just for the nicer lounge at T5!

It was an OK film, but there was something about the movie I really enjoyed: George's "road warrior" tips to his colleague in the security line were just the same as my own mental checklist. And I have a Hilton Honours gold card too.

In the future, everyone will be famous to fifteen people.
[posted with ecto]
Posted by Cayce Pollard at 4:48 pm No comments:

In the excellent, excellent movie "The Damned United", Brian Clough has a run in with his chairman in 1969 because he signs Sunderland midfielder Colin Todd for £175,000 which the chairman thinks is outrageous, but not as outrageous as his £300 per week wages! Just for comparison, the equivalent player today (someone who can hold the ball and not waste it) would cost around £5-10 million with wages of £75,000 per week. In fact there are players in the Premier League whose wages are already approaching Colin Todd's transfer fee EVERY WEEK.

By the way, I wasn't that bothered about watching Dammed United, but I was bored on a plane so I just started watching it out curiosity and within two minutes was completely hooked. It's brilliant, and Michael Sheen's performance as Brian Clough is awesome: he doesn't try to imitate Clough like an impressionist but instead captures an essence that I found totally absorbing. Brilliant film, in a week of brilliant films.

In the future, everyone will be famous to fifteen people.
[posted with ecto]
Posted by Cayce Pollard at 4:16 pm No comments:

Famine in Ethiopia, which has occurred roughly once every decade since the dawn of recorded history, is back in the news but for an unexpectedly interesting reason.

I remember someone telling me before that something like 100,000 people died directly because of Live Aid, because the food supplies meant that the government could fight on for longer, but it's really interesting to hear that this may be an underestimate. I made myself very unpopular at the time of Live Aid by telling my co-workers (I was living in the SF at the time) that if they really wanted to help starving people in Ethiopia then they should be sending them AK47s, not sacks of rice, since they were starving because Ethiopia's government wanted them to. It hasn't rained in Australia for god knows how long and no-one is starving there (to the best of my knowledge). That's not to say there aren't serious problems, as the BBC tell us

Steve Evans reports from Melbourne, a city that has suffered ten years of drought. He talks to oyster farmer Graham Taylor, who says that the lack of rain means less food for the oysters.

[From BBC World Service - Business - Living with drought in Australia]

Drought so serious that oyster farmers are concerned. Wow: that's how bad things can get in a democracy. When the famine in Ethiopia began killing large numbers of people in 1984, the Ethiopian government was spending half of GDP on weapons. Australian defence spending is 2.6% of GDP. Go figure.