All's well with the realm

There are seven ravens are in permanent residence in the Tower of London; their wings have been clipped so that they can't fly away. A superstition dating back to the time of Charles II claims that when there are no longer ravens in the Tower, both the White Tower and the kingdom will fall. The Ravenmaster -- one of the Yeoman Warders -- tends the birds; they even have their own pens. Well, the good news is that I was at the tower on Tuesday and they were still there.... 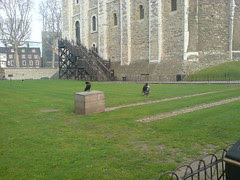 Posted by Cayce Pollard at 12:03 pm No comments:

I was wondering what was going on as I pottered down to Woking station this morning. There was a police helicopter overhead and I saw a bunch of policemen wandering around and a policeman with a sniffer dog on the other platform. At first I just assumed that someone hadn't paid their fare and South West Trains were going to make an example of them. But then I thought that because of the sniffer dog some exciting anti-terrorist action was in progress, or that a drug lord had been cornered on Platform 1, trapped by the late running of the 09.58 to Waterloo. Turns out that Prince Charles was visiting and he came by train from Waterloo. How exciting. It turns out that some people had turned up to watch Al Gore's movie and the Prince was giving a talk about it. Anyway, I hope that he found time in his busy schedule to ask what on Earth is going on with the stupid canopy that the council is still building outside the station. Because of this, buses can't stop outside the station. Normally, I'll wait near home and take the bus, because the bus stops right outside the station. Since it can't, it takes as long to walk from the bus stop to the station as it does from the car park. The inconvenient truth is that because of this, I've been driving instead of taking the bus.

Apologies for posting this a month late, but I didn't realise that I hadn't posted it at the time.

Posted by Cayce Pollard at 5:13 pm No comments:

Amsterdam in the morning

A relaxing breakfast in the splendid dining room at the Hotel Krasnapolsky on Dam square. I like Amsterdam -- I used to live in the Netherlands -- and find it very pleasant to stroll around on a mild Spring day like today. 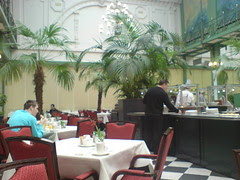 It sets you up for the day, breakfast in grand style like this. I always regard a massive cooked breakfast as my compensation for being away from the family, not sleeping well and (in this case) missing watching the F.A. Cup quarter-final live on TV.

Posted by Cayce Pollard at 9:06 am No comments:

A random act of kindness

Not by me, obviously, but I did witness one with my very own eyes. Outside a Starbucks in London this morning. There was an old tramp -- although it's hard to tell how old he actually was, he was probably 30 or something -- who was filthy and decrepit. He was mumbling incoherently about not having had anything to eat for days while people were wandering past ignoring him. As I did. But as I walked past, a guy dressed in a smart suit (this was in the City) came out. He walked past the tramp for a few paces, then stopped and turned back. He took out of his wallet what looked like a £20 note gave it to the tramp. All day, I have been wondering if this was simple charity, part of some wider philanthropic exercise, a means of assuaging guilt over city bonuses, bizarre performance art, or what? I have a firm policy of never giving "beggars" anything...

Posted by Cayce Pollard at 8:04 am No comments: