I'm a pretty good traveller, I think, and I don't get wound up. But yesterday was just one of those days. My flight was delayed three-and-a-half hours because of fog, so I was sitting in the British Airway lounge at Heathrow for nearly five hours all told, all the time cursing myself for not bringing my splending new USB 3G modem dongle thingy with me. I absolutely refuse to pay to use the wireless network: it should be free to BA silver and gold card holders and why they can't just send you a password to log in to the wireless network in any lounge I don't know. Anyway, I got to Munich and took the train to Augsburg. The train was eight minutes late, which I expected to make the front page this morning but it didn't: things must be getting worse here all the time. When I arrived at my hotel, they had sold my room, because it was only guaranteed until 9pm, which I didn't know. They had a ring round some other hotels and found me a place at Hotel Augusta, which had no internet access and the movie/sport channels didn't work either. And my room was noisy. And then when I got up I got confused about the tram lines and almost froze to death waiting for a non-existent tram. Oh well. Seems like a nice place though. I met up with a friend and we went to the traditional "Irish" pub for some Belgian beer and Mexican food.

Anyway, here's what Augsburg looked like in the morning, while I was waiting for a tram at the wrong tram stop...

Just to round things off, when I got back to the UK, I picked up my car from Pink Elephant around 11pm and (exhausted) set off home. But the M25 had three of the four lanes coned off from Heathrow round past the M3, so I sat in a huge jam. It's a glamorous life.
In the future, everyone will be famous to fifteen people.
[posted with ecto]
Posted by Cayce Pollard at 9:28 pm No comments:

I'm Singapore and have been downtown to join in the Year of the Rat festivities. 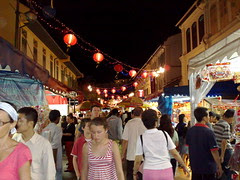 What a splendid day out. Everything works, everything is clean and efficient, the weather is pleasant, everyone is friendly, good food, a couple of beers, everyone is out in the street, the market stalls are fun. I hope it's a good one for all of you Rats out there.

OK, so I'm clearly not the only one who wonders why it is that -- insofar as they are not speaking in a professional capacity, be it as an actor about the theatre, a pop singer about recording studios, or a wannabe cockney cook about jellied eels -- celebrities are afforded media coverage and perhaps even reverence when they pontificate from the same perspective as an average member of the public (ie, cluelessly) giving their views on certain matters with which they may or may not be familiar. As Spiked say, they’re entitled to spout nonsense views on a subject as much as the next person, just as we’re entitled to question, ridicule or ignore them. But why have the public utterances of people like Gwyneth Paltrow, Madonna or Jamie Oliver acquired such significance? Why do we think that because someone is, say, a pop star that their opinions on anything are worth listening to? You don't have to go the absurd extremes of Irish tax-avoider Bono or capitalist entrepreneur St. Bob lecturing us on poverty to find examples that ought to engender a double take.

This absurd trend in modern life reached a new low a couple of weeks ago, when I heard an actor who plays a teacher in a movie being asked (by the BBC, no less) about education policy. I don't know what the show was, but I think it was on Radio 5. I flipped on to it in the car and at first I assume it was an interview with some sort of education expert, but after a few minutes realised that that it was an actor. The actor turned out to be former rent boy Rupert Everett, who is in the movie St. Trinians, which looks absolutely ghastly in every respect. Fortunately, the reviews are so bad that it won't be in your cinema for long, if it hasn't already gone to DVD. Only another person removed from reality (ie, a BBC employee) could imagine that we would be interested in Rupert's declaiming about schools, education and the learning process. Personally, I don't care what Rupert Everett thinks about anything at all (least of all matters of public policy), but who am I against the crowd. Still, I nearly choked on my Yorkshire Gold when I heard him talking about everyone packing children off away to school at the age of seven. No, that's not everyone Rupert, it's nobs like you. Most of us rather like our children, so still have them at home.

Posted by Cayce Pollard at 8:56 pm No comments:

I took the train from Guildford to Birmingham. It was comfortable, I have to say. There were power sockets for the laptops, a table to work on and a buffet station serving only a few feet away. But it took 2 hours 45 minutes, which is longer than Waterloo to Paris. I took the train to York. On the way there were no power sockets in cattle class, and I had to stand up all the way back. I took the kids and some of their friends into Woking town centre and to be green, I went on the bus. It cost more than fifteen quid. Last night I saw -- I don't know what the programme was, I was just flicking over -- a sanctimonious green type (who looked and sounded one of those metropolitan millionaires who are always going on about other people having to cut down on air travel) was going on about getting people out of their cars and into public transport. He meant, I'm sure, getting other people out of their cars. Communist. I want to be green, I really do, but the only way to get me to use public transport more is to make it better. Ah, but how? Since I live under the yoke of South West Trains who can arbitrarily raise fares as much as they like whenever they like, it doesn't seem like much of a system. Perhaps if we were to concrete over the railway line into Waterloo, then coach operators could compete to provide a green (they could run on soya or something) service into the heart of London.

Posted by Cayce Pollard at 6:22 pm No comments: