In case of sonic attack

I've been having a bit of a Hawkwind week. Because of a couple of other things I'd bought, Amazon put a bunch of Hawkwind CDs in my recommendations list. Since some of them were only 3.96 on a special offer and a couple of them were remasters with additional tracks, I bought a few...

"In Search of Space: Remastered" (Hawkwind)

"Masters of the Universe" (Hawkwind)

A slave to big copyright, I actually already own all of these on vinyl (which I haven't played for at least 20 years) and I know for a fact that I'd bought some of them on CD. (And I'll be buying yet another version of Space Ritual next month, because a new remastered audio DVD is coming out.) The old ones may well be somewhere around the house, but I can't find them. Anyway, who cares about vinyl or CDs anymore. As soon as they arrived, I ripped them straight to my iPod and I've been listening to them on trains, planes and automobiles this week.

I mean, Hawkwind probably are my all time favourite rock band. I've probably seen them live more times than any other band except possibly Motorhead -- and one of the best nights out in my entire life was Hawkwind with Motorhead at the Hammersmith Odeon Christmas show in 1979 -- at venues ranging from outdoor festivals in six feet of mud to provincial clubs to concert halls. I'd say that the standout was probably the Elephant Fayre down in Cornwall in (I think) 1985, where they came on at midnight and played a set that made the hairs on the back of your neck stand up, including a full-on version of Needle Gun that I'll never forget. I also remember a great set by Nik Turner's Inner City Unit later that night. I don't know if it was the atmosphere, the crowd or the mood-enhancers but it was truly unforgettable.

I've spent this week reminding myself over and over again what a magnificent outfit they are. When it all comes together for them, as it did for Space Ritual, they are amazing. When you're jammed into the Tube at the end of a long day, so tired you can't think straight and so hot that you can't breathe properly, listening to Orgone Accumulator or Born To Go verges on the surreal. Suddenly you really are 20,000 light years from home, surrounded by aliens... When the guy at Embankment said "Mind the gap", I was genuinely surprised he didn't say "In case of sonic attack... mind the gap".

Posted by Cayce Pollard at 5:30 pm No comments:

I got an e-mail from the BBC

Which should have been titled "We are useless", but was actually an invitation to take part in a trial of their ridiculous iPlayer, that won't work on any of the numerous computers in my house...

Hello, Earlier this year you took part in a survey on the BBC's website. As part of your feedback to us, you said you would be interested in taking part in future surveys or market research projects for the BBC. We would now like to invite you to help us try out a new online service. BBC iPlayer Beta offers a range of BBC television programmes to download to your PC from the last seven days. To take part, you must have access to a PC with broadband at home. It must be a PC as the technology is not currently compatible with an Apple Macintosh. It is also not currently compatible with Microsoft Windows Vista. Please bear in mind this is a beta test service so you may encounter a few technical faults, and there may be times when it is necessary for it to be temporarily suspended. BBC iPlayer Beta is open to a limited number of people in a closed environment. If you're interested, please click on the link below to register and, if you're successful, we'll contact you shortly. Many thanks, BBC iPlayer Beta Team

How ludicrous is that? Spending millions developing something that won't run on Vista or Macs. Fortunately, I imagine the "security" will be broken within a week and we'll be able to download the BBC shows we want from Bit Torrent like normal people do.

The voices may not b real, but they do have some good ideas.
[posted with ecto]

Posted by Cayce Pollard at 3:51 pm No comments:

This was different (for me). I went to the Xscape near Glasgow for odd reasons to do with work. I'd never even heard of Xscape before, but it turns out there's one down south in Milton Keynes as well. Anyway, we went sliding down the indoor ski slope on toboggans, which was pretty enjoyable. I'd never been to an indoor ski slope before, so it was an interesting afternoon. I think I could tell that it wasn't real snow, but I'm not sure if I could tell you why: if I say it was too wet, that doesn't really explain it. Anyway, even though it wasn't real, sliding down it was still real fun. 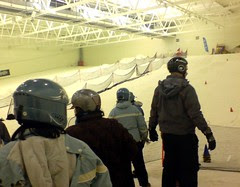 Posted by Cayce Pollard at 2:22 pm No comments: 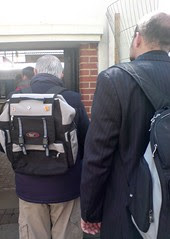 I wasted hours on a stupid Windows problem that turned out to be because I was using the wrong Windows XP install disk. My PERFECTLY LEGITIMATE Windows disk wouldn't install because it wanted a serial number that I couldn't find anywhere so I borrowed one from my next door neighbour. It turned out to the be wrong version (I needed SP2, whatever that is). In the end, I went on to PirateBay and downloaded a copy using BitTorrent. What kind of world is it when it's easier to get a copy of some software from PirateBay than to install the software that you've paid for? Anyway, since I had hours to waste while all this was going on, I designed a new Windows logo that I'm going to use on all my Windows CDs and DVDs from now... 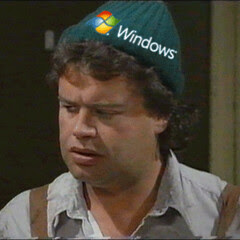 Posted by Cayce Pollard at 3:55 pm No comments:

I was looking at the local election results in the paper while sorting out the recycling. In one constituency (Tony Blair's, as it happens) the Tory candidate got no votes at all. This is the first time that someone has managed to get no votes at all since 1860, which I think is pretty spectacular. She couldn't even vote for herself, since she doesn't live in the ward. Somewhere else, I can't remember where, they elected an 18 year old. Come on. What was he campaigning on? Playstations vs. Wii? It's absurd that eighteen year olds are allowed to vote, let alone stand for office. No-one should be allowed to do either until they've paid a full stamp (National Insurance / Social Security contributions, for our foreign visitors) for at least five years. And, while I'm on it, and much as I don't want to touch on either religion or politics on the blog, I will just make the point that the fuss about tens of thousands of votes get ignored (in Scotland) because of complicated ballot papers is ludicrous. Ballot papers should be complicated: if someone can't pass the simple threshold of filling out "1, 2, 3, 4" instead of "X", then it seems amazing to me that they should be allowed influence over my rubbish collection options.

Posted by Cayce Pollard at 9:35 pm No comments:

Uh oh. It's look as if the middle-class revolution meme that I referred to has now spread to the Ministry of Defence: "The middle classes could become a revolutionary class, taking the role envisaged for the proletariat by Marx". I'm not quite sure what this actually means, since as far as I know, Marx was wrong about everything, starting with the Labour Theory of Value (which was at least 200 years out of date when he started writing) and going downhill from there. But anyway, if there are any revolutionary cells out there who are thinking of striking a blow against bi-weekly rubbish collection, I've a feeling they may start to snowball.

Posted by Cayce Pollard at 9:21 pm No comments: