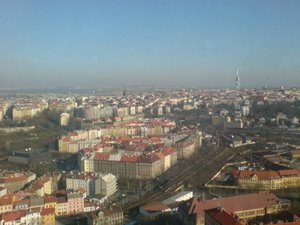 A lovely day couple of days in Prague. I think I heard on the BBC that there hadn't been a government here for seven months, which may be one of the reasons why it is so energetic and prosperous. Went out to dinner at a super restaurant overlooking the river and the castle and had my first Czech food: some kind of meatball soup that was delicious and a steak in cream sauce with cranberries and dumplings -- just typing it out is making me swoon. When you have some really, really nice meal that you've never had before, it's what passes for excitement at my advanced stage of life.

Posted by Cayce Pollard at 9:05 am No comments:

Ah, spring is almost here. It's a lovely day down at Waterloo Place...

Posted by Cayce Pollard at 9:38 pm No comments:

The government here has decided against building a new national identity id card system. Instead, the Home Office and their management consultants decided to knock one up from some old databases they happen to have laying around at the

Still, not to worry. The government says that all of the data from DWP database will be checked again before it is put into the new "National Identity Register". The architecture of the system is rock solid and completely secure because according to Peter Wilson, a spokesperson for the Home Office, "It's rather like a filing cabinet that DWP owns and maintains... We have our own shelf, which is empty, and which we will populate with our own records and which we have our own key to." What could possibly go wrong?

One or two other aspects of the new architecture are a little surprising. I found a comment from Graham Titterington from Ovum. He points out that the role of biometrics appears to have been downgraded. There is no mention of iris recognition, apart from a brief sentence, and the report talks in general terms about 'biometrics such as finger prints' and appears to have given up on creating the 'gold standard of identity' originally proposed. He notes that "Whilst, the government is still placing heavy reliance on the role of biometrics in preventing a person from making multiple registrations in the NIR, this objective seems unlikely to be achieved without the use of iris scans".

I've seen some commentators call the new Home Office strategic action plan to introduce ID cards from 2009 a step in the right direction. I disagree: it's a giant leap in the wrong direction and it will make the current situation (ie, no ID card) worse in almost every respect. This is very disappointing for people like me who think that a properly thought out identity card would be a good idea in the modern world.

How can giant projects like this rumble along without any inspiring vision of how they are going to deliver 21st century services that will transform the lives of citizens rather than half-baked, crappy, "computer says no" emulations of the 1950s?

Posted by Cayce Pollard at 8:16 am No comments: