Now, although I don't care about Russell Brand in the slightest, I do know who he is. I've never listened to his radio show, but I've seen him on things on TV from time to time (although I can't think of any specifically). Like most people in Britain, I only associate his name with one thing, which was being rude to Andrew Sachs, a national treasure. I know that he is in films as well, but haven't seen them. Judging by the reviews of his new film, I doubt I'll even watch it for free on TV.

Flicking round the channels bored after the World Cup, I accidentally turned on Channel 4, which had him doing a sort of stand up act. It wasn't funny, but that's fair enough. What was odd about it was that it was boring. That, I hadn't expected.

In the future, everyone will be famous to fifteen people.
[posted with ecto]
Posted by Cayce Pollard at 7:59 pm No comments:

Well, since we've had a coalition government, we don't seem to have had much of a loyal opposition, which is bad for democracy. I think the media need to realign themselves so that they give a more realistic view of the political landscape. This means treating the Monster Raving Looney Party as the official opposition from now on, while treating the Actual Raving Looney Party (formerly known as New Labour) as a wacko fringe. After all, the last two things I read from Actual Raving Looney Party MPs were Michael Meacher (who thinks 9/11 was a plot by the US government) talking about how humanity is a virus that will be wiped out in 200-300 years and Geraint Davies talking how Visa and MasterCard should be fined if people use their cards to buy child pornography. Compared to this, the Monster Raving Looney Party's manifesto promise to ban envelopes and make people write everything on postcards -- to stop criminals, pedo, terrorists, drug dealers etc from using the post to go about their despicable businesses -- looks positively sensible.

Now, I have to say that there is something a tad depressing about living in a country where the pronouncements of MPs from Her Majesties Loyal Opposition are indistinguishable from deliberate satire, but perhaps my plan will bring things to a head and help us to move on. If the Today programme, for example, were to get into the habit of asking for comment on government policies from Alan "Howlin Laud" Hope, head of the Monster Raving Loonies, instead of, say, Dedward. Remember, when the Loonies first stood for Parliament in 1963, two of their main manifesto pledges were votes for 18 year olds and all-day drinking in pubs, both policies that were eventually brought to the statute book by the Actual Raving Looney Party some time later.

In the future, everyone will be famous to fifteen people.
[posted with ecto]
Posted by Cayce Pollard at 8:39 am No comments:

The was a very sad story in the newspapers today. The last rhinoceros in a South African game reserve was found dead. She had been drugged by poachers who cut off her horn for sale to Asian (predominantly Vietnamese) buyers and left her to bleed to death. Her cub was found wandering, starving, near her dead body. In the newspaper report, various people said that there was nothing that could be done to stop the poachers.

The plight of a baby rhino whose mother was left to die after poachers drugged it and sawed off its horn has highlighted a resurgent threat in South Africa from criminal poaching gangs.

[From Rhino poaching on the rise in South Africa - Telegraph]

But they haven't heard my idea. I notice that there are tourists who will pay considerable sums of money to be allowed to shoot a lion or an elephant. I think many of them are Russian. How much more would they pay to shoot a poacher? Surely this would be the most eco-friendly form of tourism that there is, even more so than the very eco-friendly hunting of big game.

Big game hunting has an important role in preserving large areas of land from agriculture and settlement in Tanzania and elsewhere. The Government has set aside large areas of land as Game Reserves, over 100,000 km2 in total, which allow for limited tourist hunting. The money generated from this type of hunting through licenses and fees is used as a justification for keeping people out of these areas since the money can be used by the Government to build roads or hospitals etc. My research group at the University of California at Davis has shown that Game Reserves are beneficial for both mammals and vegetation.

There are not many rhinos but plenty of poachers, so this should provide a significant source of long-term revenue for African nations. The tourists could hide in armed redoubts in areas where rhinos live, or they could perhaps denote hidden mines when poachers walk by or similar. The newspaper claims that the poachers use helicopters, so providing the eco-tourists with shoulder-launched heatseeking missiles is an obvious step. I can Vladimir Putin in Hello! magazine, stripped to the waist next to a burned out helicopter with rhinos (safe and sound) grazing peacefully in the background. It's the ideal green holiday for oligarchs from around the world, much more exciting than the typical carbon offset programme. I don't think there would be much local opposition to my plan. Surely if we could persuade the South Africans to replace "Kill a tourist" days -- yes, that's right --

“It was Kill a Tourist Day,” she explains. “And we were in the way.” ... Yet when they called South African police to report the incident, the officer just said “yes, thank you,” and hung up. It was only when a member of the family later met someone who had police connections that the investigation went further, although Smurfit has not found out who was responsible for the attack.

with "Kill a poacher" days, we could be well on the way to a thoroughly green solution. I will send my idea to Britain's only Green MP (Caroline Lucas, who rather unfortunately mistook noted private school supporter and Labour leadership contender Diane Abbott MP for a man), and expect a favourable response.

In the future, everyone will be famous to fifteen people.
[posted with ecto]
Posted by Cayce Pollard at 2:51 pm No comments:

Mobile phones, they are a curse really

I was on a flight to somewhere or other, and I had an aisle seat. Across the aisle from me was a woman who talked on her mobile phone from the moment she got on the plane and was still talking as we went down the runway and only hung up after the plane had left the ground. The stewardess asked her to turn it off a couple of times and she completely ignored her. 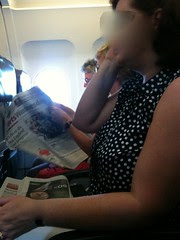 What's worse is that because I was obeying the rules and had turned off my iPhone, I couldn't carry on listening to what I was listening to, which was the Paul Jones Blues hour that I'd downloaded from BBC Radio 2, and so I had to listen to her drone on and on. I wish it was possible to report that she was a top futures trader and I made a fortune by overhearing her conversation, or that she was a top heart surgeon discussing a critical case. She wasn't: she was discussion tedious administrative details at what sounded like a tedious public-sector body.

It's soon going to get to the point where they have mobile and no-mobile sections of the plane, just like they used to have smoking and no-smoking areas.

In the future, everyone will be famous to fifteen people.
[posted with ecto]
Posted by Cayce Pollard at 3:49 pm 1 comment:

I rather like having some protestors opposite Parliament. For many years, the pavement of Parliament Square opposite the House of Commons has seen continuous protest, as shown below. Now, I have to say that every time I come round the corner and see a banner calling for the arrest of the Foreign Secretary (or whatever) it gladdens my heart. I think there is something very British, and very special, about allowing people to demonstrate right outside the Mother of Parliaments. It's about a commitment to free speech and the right to protest. 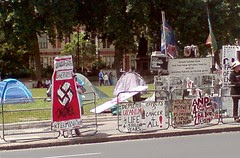 It's not a big area and it tends to get monopolised, which is wrong. It really should be like the 4th plinth in Trafalgar Square, so that different groups of protestors get to use it for a week at a time, because otherwise you end up seeing the same protesters over and over again. Despite the picture above, they're not all nutters, obviously. Some of them have very sound points of view: 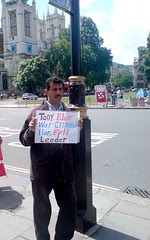 But in recent times the whole of the square has been taken over by a collection of tents and banners that calls itself (hilariously) "Democracy Village". Parliament Square belongs to all of us and is a major tourist attraction. I really object to it being turned into a revolting camp site and was really upset that the Mayor failed to evict them today.

Democracy Village has housed an array of protesters, vagrants and helpers voicing concerns over Afghanistan, climate change, the Middle East and anti capitalism. They have called today's eviction an affront to democracy.

Frankly, I object to them even calling it "Democracy Village" since virtually none of the "protestors" care less about democracy here, in Afghanistan or anywhere else and none of them were elected to represent anyone anyway. When I walked past it last week, there were banners supporting a wide variety of bonkers causes -- everything from "9/11 truth" to "boycott Israel" to "stop the Freemasons from secretly controlling the Home Secretary" -- as well as one or two causes (such as "dad's rights" and so forth) that are not really to do with democracy.

Real democracy, pure, radical democracy is (according to [people supporting the protestors]) about being elected by no-one, representing no-one. What arrogance must motivate you to believe that you have the right to monopolise an area to which other citizens should have free access; to protest, yes, but to enjoy also, to take a stroll in, to have a quiet sit down.

But let's suppose that we support their right to free assembly (as I do) and their right to hold transparently ludicrous opinions (as I do). I suggest that we set aside a brownfield site somewhere in, let's say, Middlesborough (where i imagine there are quite a few of them) and make it a Democracy Village that we can be proud of. All we need to do is bulldoze whatever is there and they take all of the "Peace" Camp up there. They can protect in peace, without disrupting the capital, and if they are inventive and creative, they can turn it into a major media attraction (and perhaps even a tourist attraction). I think this could be just the compromise that's needed to move along.

In the future, everyone will be famous to fifteen people.
[posted with ecto]
Posted by Cayce Pollard at 10:35 pm No comments: