If it's Wednesday, it must be Istanbul

It's a beautiful morning here in Istanbul. I'm looking out over the Bosphorus, where the water looks wonderful. Last night we went to dinner at an excellent fish restaurant down on the Bosphorous and on the way had a fantastic view of the Bosphorous Bridge, which has been illuminated with red lights and looked fantastic. I had a quick google and couldn't seem to find a picture with the show, but I did find this nice showing the view from the top of one of the towers... Posted by Cayce Pollard at 9:51 pm No comments:

It doesn't get much worse than this 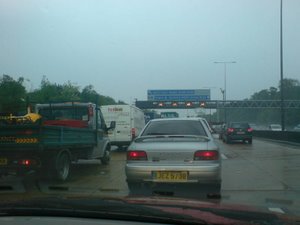 A bit of real time blogging, using my jolly clever K800i phone's "send to blog" function, live from inside my car while I alternately fume quietly, rage against an indifferent universe and cry. It's pouring with rain, the M25 is blocked because of an accident, I'm going to miss my flight and there are a million things to do. Why oh why didn't I take the train. (Answer: because it doesn't go from my house.)

Posted by Cayce Pollard at 4:02 pm No comments: 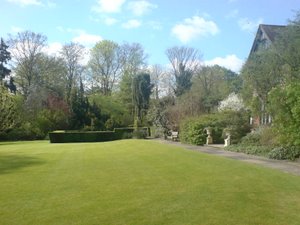 Next week, Hull.
Posted by Cayce Pollard at 10:26 am No comments:

I got called a guru the other day. The context isn't important, but it was flattering, if not lucrative. But it did lead me to a new aphorism for these blog posts, so in truly recursive style, I am of course driven to blog about it.

Everyone is an expert about something, if you draw the boundaries tightly enough. But to make the step to being a guru you also have to have made a lucky guess about something that subsequently turns out to be true: in these particular circumstances, it was to do with some observations I had made some years ago about the role of mobile phones in the future of financial services. But you also have to have an audience to be a guru too, and that set me thinking about the various blogs that take up more and more of my time.

I can't source the "megabytes" quote, although I have found it via google being used back in 1997 so it's a least a decade old but I hadn't heard it until recently. Spookily, Uri Geller predicts it only three years after it first appeared on the web, a testament to his psychic powers. I've found the "fifteen people" version being used back in 1996 in it's Internet context and later being ascribed to a Scottish artist called Momus back in 1991, but apparently it also dates back to the the man himself. Perhaps Warhol really was some kind of savant.

Not even artificial intelligence

I had to go to Oxford, and since I have a lot of work to do at the moment, I took the train (nearly sixty quid return). So, I went to the train times web site and searched for a train journey that would get me in to Oxford around 8.30am. Computer says yes: there's a train from Woking that wil get me to Guildford for the 7.04 to Reading. That gets in to reading around 7.50, then there's an 8.10 to Oxford. I decided to drive to Guildford and get the train from there, since there's wouldn't be much traffic. I got there early in fact, to discover that there was a 6.51 fast service direct to Oxford (only stop: Reading). The (Virgin) train was on time, half-empty and therefore comfortable and convenient and I got plenty of work done. Why can't the train time system have a modicum of artificial intelligence: it must know that direct, fast services are infinitely preferable to slow, indirect services, so even if you are going to get in a few minutes early, you'd rather the former.

Posted by Cayce Pollard at 6:59 am No comments:

I don't often answer my mobile phone. There are a few rerasons for this. For one thing, I don't have millions of phone numbers stored in my phone and I won't answer the phone at all unless it displays the caller name rather than a number.

My phone is set to silent/vibrate most of the time anyway. I can see who has been calling, I can read text messages and, since I can read my e-mail on my phone as well, check mail every hour or so when I'm around and about during the day. I did have the phone set to work like a Blackberry and but it was a waste of time since I can't be bothered to look at e-mail every five minutes.

This may sound like a Vodafone Victor Meldrew in the making, but I think it's modern etiquette and I'm a trailblazer. I don't ring someone unless a I really need to talk to them: phoning people is impolite, because you are disturbing them when they are doing something else -- thinking about something or maybe talking to someone -- but most of the people I talk to work in the same field as me: there are never any truly important messages (the liver is ready for transplant, that sort of thing). If I have a tolerably urgent message for someone or need a quick yes/no response on something, then I text them. I found out how to create text templates on my phone so I can do this quickly, and I if someone whose number I don't recognise phones me, then I can quickly send back a text asking them to leave a message or e-mail or whatever.

And the most golden rule of all: never, ever, answer the phone when you are sitting on a train. No-one is impressed by mobile phones anymore so they will all think that you are a tosser. Is that how you want to be remembered? I'm going to start a YouTube album called "SWTossers" where people can send pictures (taken with their camera phones) of people talking on the phone in South West Trains carriages so that they can be universally reviled and abused on a grand scale and henceforth excluded from polite society.

Has the revolution started?

When I heard this terrible story on the radio, it immediately made me think of J. G. Ballard's Millennium People, which is set in Chelsea. I won't give the plot away, but an idea in the book is that the next revolution will be lead by the middle classes rather than the working classes (I suppose political theorists would argue that all the others were too). Anyway, if memory serves the book contains a line to the effect "When the revolution comes, it will be about parking".

But then I thought, is it a very English thing? Is that why Ballard went down that route? I mean, people don't shoot each other over parking spaces anywhere else, do they? Well, apparently they do: 10 seconds on google found the same in Los Angeles, New York and Oakland. It was too depressing to scroll down further.

Posted by Cayce Pollard at 4:38 pm No comments: